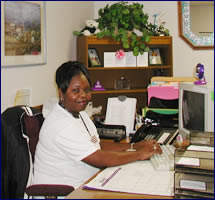 Laverne Banks volunteered as an administrative clerk for a period of five years in various organizations. She felt that volunteering as a clerk enhanced her skills for future jobs in addition to preparing her for a permanent job. During the last volunteer job, she worked as a receptionist and a secretary, and while performing duties on that job she became aware of the services provided by the Middle Georgia Consortium, Inc. Laverne found out that she could get more training and continue to enhance her clerical skills, receive a salary while training, and get a permanent job. Laverne was accepted into one of the Consortium's work experience programs and was placed with the Phoenix Center Behavior Health Services located in Warner Robins, Georgia. Shortly after beginning at the Center, a clerical position became available. Because she had exceeded the employer's expectations for this position, Laverne applied and was selected. She stated, "I was placed on that job during a time in my life when I felt that I would never get a permanent job anywhere." She further stated, "The opportunity for training through the Middle Georgia Consortium paid off." Laverne has since been promoted to Admissions Clerk on her job and she states "Thanks to the Behavioral Health Services and a special thanks to the Middle Georgia Consortium for giving me the opportunity to be placed in a training which ultimately led to permanent employment."