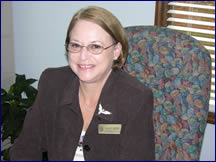 In June 1999, after more than seventeen years working in Milledgeville for Forstmann & Company, Janet and Robert Mimbs were laid off due to the plant closing. To complicate matters, they had two children attending Central Georgia Technical College which added an additional financial burden due to the lack of income. Janet remembered thinking "Why me, how can this happen to me?" Janet had always dreamed of returning to school. However, with no family income and two children enrolled in technical college, she quickly dismissed the idea. On one of her visits to the Department of Labor, a DOL representative mentioned the possibility of her returning to school and the possibility of obtaining financial assistance from the Middle Georgia Consortium, Inc. Although it had been 30 years since Janet had attended any school, she made two decisions that day - (1) to enroll in Central Georgia Technical College's computer information system program (CIS) and (2) to contact the Middle Georgia Consortium. After enrolling, Janet wondered many times if she had made the right decision. The results indicate she made the right decision because she graduated with a 4.0 GPA and an A+ certification. Janet believes that had it not been for the Consortium it would have been very difficult to complete school. "You see, they paid for my books, tuition and supplies. I was having difficulty reading the material and they even purchased eye glasses for me. Without their assistance, I would not have been able to concentrate on academics because we had no money at that time." Good news! Janet is now employed at the Georgia Department of Labor (DOL) in Milledgeville as an Employment Services Specialist in the Re-employment Unit. Janet serves as an unpaid ambassador for the Consortium's services in the community and points to her own personal experience as an example. She received an additional certification as a certified resume writer and was placed on the state's Rapid Response Unit to assist others that may be laid-off in Middle Georgia.