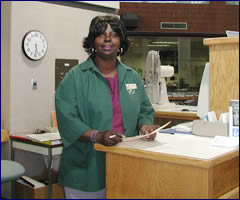 Judy Tucker, a divorced mother of three children, received public assistance for twenty-seven years before being referred to the Middle Georgia Consortium, Inc. by her case worker. While enrolled in the Workforce Investment Program under the Consortium, she received the necessary training and financial support to enable her to get off of welfare. With the support she received, Judy was also able to face challenges such as transportation problems and financial obligations. Judy became a Library Technician Trainee at the Robins Air Force Base Library where her job performance excelled. As a matter of fact, she did so well that she was told that she would become a likely candidate for permanent hire. In June 2001, Judy became a permanent Library Technician. She feels that she owes it all to the Middle Georgia Consortium, Inc.