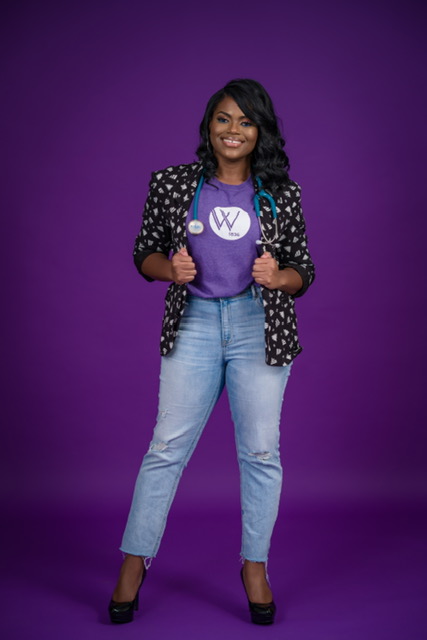 Being a spiritual person, I always sought God to show me what my purpose is in life and how I could make an imprint in this world. In 2017, it was revealed to me that I would become a nurse. Previously, I had already obtained a bachelor’s degree in biology where I had exhausted the full amount of federal aid, but I was still working in retail due to not being able to find a job to utilize my degree. Becoming a nurse was something I knew that I would be great at, but I kept allowing my insecurities to block me from going forth with what God had already planned for me. Those insecurities were destroyed when I was accepted into the nursing program at Wesleyan College for their first spring cohort in 2018. Exciting as this new journey was about to become, I had no clue where I would come up with the money to pay for the private institution’s tuition. Before finding out about WIOA, I had to make the unsettling decision to take out a private loan to pay for my first year of the program. After running out of resources to pay for school, other than to take out more loans. It was my last semester of the program when I was finally advised to look into WIOA. I wished my school would have been more vocal about WIOA, as it would have saved me thousands of dollars during my first year in the program. Thanks to WIOA, I was able to pay the full amount of tuition for my last semester. WIOA also helped with paying for scrubs and other equipment that was required for my program. WIOA also paid me a biweekly allowance for gas when I attended class and clinicals. The biggest support needed from WIOA was the aid to pay for all of the fees in order to take the NCLEX. I am grateful to WIOA for allowing me to not have to worry about finances and to be able to focus on graduating and finishing the program. After graduating the program in December 2019, I accepted a job as a trauma nurse at Barnes-Jewish Hospital in St. Louis that is ranked number one in the state of Missouri and metro St. Louis. Barnes-Jewish Hospital is also listed among the nation’s elite medical centers in U.S. News & World Report’s annual list of “America’s Best Hospitals”. In the future, I do plan on becoming a nurse practitioner and plan on working in underprivileged communities to assist in reducing racial/ethnic disparities in healthcare. I recommend that if your passion is to become a nurse, yet you don’t have the financial assistance to fulfill that dream, look into WIOA and make it happen! Thank you to the Middle Georgia Consortium Inc. and WIOA for helping and being a part of my journey to becoming an RN.